Shame on the Kennedys 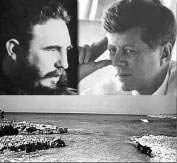 In yesterday's Boston Sunday Globe, Bryan Bender reported on the Kennedy family's tight-fisted and iron-willed efforts to keep the official papers of Robert F. Kennedy secret.  Those papers, spanning Kennedy's public career, are housed under close guard at the John F. Kennedy Presidential Library and Museum in Boston.  The papers of greatest interest to historians and researchers are those from Kennedy's years of service as Attorney General in the Administration of his brother, John F. Kennedy. In particular, historians say the records presumably contain valuable archival resources -- perhaps diaries, notes, messages and memos, phone logs and recordings, and other documents -- that would reveal details, and answer questions, about Robert Kennedy's role in the early 1960s as the coordinator of Operation Mongoose, a covert effort to assassinate Cuba's Fidel Castro or to destabilize his regime.

But so far, nobody has been able to see this trove of documentary resources about the foreign-policy intrigues and governmental activities of a half-century ago.  Why not?  Because Robert Kennedy's family controls access to them.  The person in control is Max Kennedy, Robert and Ethel Kennedy's ninth son, and he won't let anyone see them.  His explanation, in a written response to questions from Bender of the Globe, is classic stonewalling -- some blather about scholars with "poorly conceived projects" who fail to follow "correct procedures" to seek permission to consult the papers. (What? They didn't genuflect as they approached Max's office?) Nice legal-speak from Mr. Kennedy.  It's also hogwash.  This is the sort of nonsense that now flows from a family that once was considered, at least in some circles, synonymous with the highest aspirational values of American politics and government -- principles such as a respect for transparency, openness, and the free flow of information.


Why is this important?  For historians and others who care about the Cold War and events of that period, the stakes are high.  Bender reports that some historians believe the documents may contain evidence that Robert Kennedy's ruthless anticommunism led him to break laws and engage in other abuses of power.  Bender quotes Lamar Waldron, author of two books about the Kennedys and Cuba, as saying, "The main acts of the Kennedy presidency involved Cuba and we still don't have the most important records."  Noting speculation about the peculiarity of John Kennedy's having "handed his attorney general the anti-Cuba portfolio in the first place," Bender quotes Philip Brenner, a professor at American University, who has written extensively about US-Cuba relations: "It is very unusual for an attorney general to be in charge of an international covert operation.  ...[Perhaps] It involved the violation of so many domestic laws you needed the top law enforcement officer to oversee it."

Maybe the documents show wrongdoing; maybe they don't.  The point is we should know.  Let's find out.

For the Kennedy family, the stakes are also high. Maybe the documents show that in addition to being the good guy of mythology (the supporter of civil rights and social programs, and, later, ardent opponent of the Vietnam War), Robert Kennedy was also a thuggish lawbreaker.  Okay.  So be it.  The Kennedy family will not be able to forestall truthful revelations forever.  And by slavishly trying to protect and perpetuate the myth, the family runs the risk of fueling an opposite view -- that the mythology is bunk, or, at least, only partially true.  Yet, the Kennedys continue to stand athwart the door to this secret depository of public records.

The papers of other Attorneys General are publicly available.  And Bender reports that "the JFK Library itself would like to make the documents available, but that "current law stipulates that it must first get a signed deed from RFK's heirs before the documents can be made widely available."

I don't know anything about the law governing this matter, and I don't have time right now to delve further into it.  But there is something deeply wrong about a policy that lets one person, Max Kennedy, decide whether the public will have access to this important information after the passage of five decades. There are at least two problems here, it seems to me: (1) a public official's family should not have control over public documents; and (2) allowing one person to decide such matters is deeply flawed as a matter of process and policy.  A bedrock principle of American government is the idea of countervailing power or "checks and balances."  In this context, this should mean that, at the very least, there are several people, from different political and institutional contexts and perspectives, who have final authority over the dissemination of this information.  Letting Max Kennedy -- any Kennedy family member -- decide this alone is unconscionable.

If, as noted above, some "current law stipulates" the details of this whole matter, then let's revisit that law.  I am not someone who is generally happy that Republicans now have control over the House of Representatives, but I would be happy to see them use their power to try to change whatever law now governs this.  I suspect such a change would make it through the House.  And wouldn't John Boehner and Mitch McConnell enjoy putting Senate Democrats in the uncomfortable position of having to defend the continued protection of these dark secrets from long ago?  It would sure be fun trying.  In any case, the Kennedy family's desire to protect the myth should not be determinant here.

I know I sound like some anti-Kennedy zealot.  I am not.  In fact, I've long been an admirer of John and Robert Kennedy.  Here, perhaps, is why Bender's report on the Kennedy family's position on this issue strikes me as so particularly galling right now.  We are just coming off one of our periodic paroxysms of hagiographic hype about the Kennedy family.  (I may have more to say about this in a future post.) Some of what we've seen in recent weeks is perfectly legitimate -- observance of the 50th anniversary of John F. Kennedy's inauguration as president and the passing of Kennedy in-law Sargent Shriver.  But in the past month we've also been treated to widespread news reports about the death of Teddy Kennedy's 13-year-old dog, Splash; weepy commentary about how this month marks the first time in sixty years that there hasn't been a Kennedy in Congress; and Camelot-coated ceremonies commemorating the 50th anniversary of Robert Kennedy's swearing-in as Attorney General.  (Really?  The 50th anniverary of a cabinet officer's swearing-in? Please.)  This sort of thing is orchestrated by the Kennedy family and their legion of acolytes and media flacks.

Here's what seems increasingly wrong about all this.  The Kennedys don't deserve this attention and adulation if they're not willing to be open with the truth, if they remain intent on having the public see only the attractive side of Robert Kennedy's legacy.  They don't deserve the unstinting praise and the undying devotion if they're not willing to come clean.  If they were to do so, they might deserve the attention that comes their way now by constant management and manipulation of the family image.  Enough.