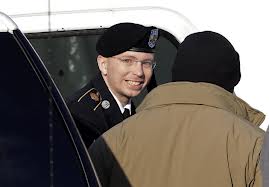 FORT MEADE, Md. – A military judge on Thursday accepted guilty pleas by  Army Pfc. Bradley Manning to 10 lesser charges against him, leaving the ex-intelligence analyst to face 12 other counts for allegedly leaking hundreds of thousands of government documents to the WikiLeaks website.
The acceptance of the "naked guilty pleas" -- meaning there is no agreement between the government and the defense that would limit the sentence – at a pre-trial hearing means that Manning faces up to 20 years in prison, even if he is ultimately acquitted of the most-serious charges against him.
Col. Denise Lind, the military judge presiding over the case, also accepted Manning’s “not guilty” pleas to the remaining charges, including "aiding the enemy." His court martial on those charges, which carry a maximum sentence of life in prison, is scheduled to begin on June 3.
During the day-long pre-trial hearing, Manning acknowledged that his actions were a discredit to the service and that he knew WikiLeaks was not authorized to have the information he provided.
At one point when Lind asked him whether he knew what he was doing was wrong, he answered simply, "Yes, your honor."
More than an hour of Thursday's hearing was consumed by Manning's composed reading of a 35-page prepared statement that offered his first public explanation of his motives for leaking the government documents to WikiLeaks. He said he did so to “spark domestic debate” on foreign policy and the wars in Iraq and Afghanistan.
Manning painted himself as a young man with an "insatiable thirst for geopolitical information" and a desire for the world to know the truth about what was happening in Iraq and Afghanistan. But he said he became increasingly disillusioned after being sent to Iraq by actions that "didn't seem characteristic" of the U.S., the leader of free world.
Manning said under oath that the first documents he sent to WikiLeaks in early 2012 were the combined information data network exchanges for Iraq and Afghanistan, which he described as the daily journals of the "on-the-ground reality" of the conflicts in Iran and Afghanistan.
He said he sent the information while on leave and staying at his aunt's house in Potomac, Md., using a public computer at a Barnes & Noble store in Rockville or North Bethesda. He said included a brief note calling the information the most significant documents of our time, and closing with, "Have a good day."
He said he tried to send the information to the Washington Post and the New York Times before turning to WikiLeaks.  He said he later sent information to WikiLeaks eight other times from his personal laptop at Contingency Base Hammer in Iraq.
Manning is facing 22 criminal charges that include "aiding the enemy" and could face a life sentence if convicted of the most serious charges.
Manning said he decided to release the first batch information because he was depressed and frustrated, and felt "a sense of relief" when he returned to Iraq. He said he finally had a "clear conscience" because someone else knew what was happening.
More on usnews >>
Publicado por Unknown en 3/01/2013 08:57:00 a. m. No hay comentarios: