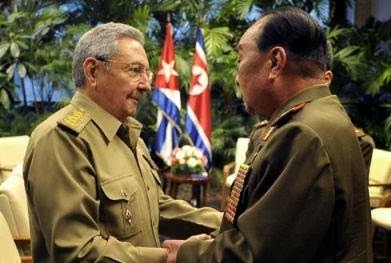 The U.N.'s Panel of Experts ("Panel") has released its official report on North Korea's illegal trafficking of weapons, in conjunction with Cuba's Castro regime.

According to the report, such weapons trafficking remains "one of [North Korea's] most profitable revenue sources."

The report also documents North Korea's efforts to sell weaponry to Iran, Somalia, Eritrea, Myanmar and other countries of concern.

In the case of Cuba, it's the first time a nation in the Western Hemisphere is found in blatant violation of U.N. sanctions.

Moreover, the report notes similar Cuba trafficking patterns by other North Korean ships in the recent past.

Here are some notable excerpts from the report:

- The Panel concluded in its incident report submitted to the Committee that both the shipment itself and the transaction between Cuba and the Democratic People’s Republic of Korea were sanctions violations.

- The Panel found that the hidden cargo amounted to six trailers associated with surface-to-air missile systems and 25 shipping containers loaded with two disassembled MiG-21 aircraft, 15 engines for MiG-21 aircraft, components for surface-to-air missile systems, ammunition and miscellaneous arms-related materiel.This constituted the largest amount of arms and related materiel interdicted to or from the Democratic People’s Republic of Korea since the adoption of resolution 1718 (2006).

- No records show the ship stopping at any countries other than Cuba between exiting the Panama Canal on 1 June and its return passage on 11 July.

- On 20 June, the ship docked in the port of Mariel, where it took onboard the arms and related materiel.
- Cuba argued that “maintenance”, as set out in paragraph 8 (c) of resolution 1718, was distinct from “repair”, which Cuba claimed was the basis of its contract with the Democratic People’s Republic of Korea... The Panel is unconvinced by Cuba’s rationale to distinguish “maintenance” and “repair.”
- The transportation of undeclared weapons and explosives in this manner posed a significant danger to all persons and facilities in proximity to the ship and should be a cause of concern among shippers, port authorities, the international maritime community and insurers.
- Evidence found on the ship (see annexes XX and XXI) pointed to involvement of Democratic People’s Republic of Korea embassy staff in Cuba. Contact phone numbers and records found in the captain’s notes led the Panel to conclude that embassy officials in Havana were engaged in making arrangements for the shipment of the consignment of arms and related materiel, including the payment methods.
- In its consultations with the Panel, Cuba confirmed the parties involved in the sugar and said that the arms shipment was part of a governmental agreement. It declined,however, to give the Panel copies of these agreements, citing confidentiality clauses in the contracts.
- The incident involving the Chong Chon Gang revealed a comprehensive, planned strategy to conceal the existence and nature of the cargo.
- All identification markings and insignia of the Cuban Revolutionary Air Force had been removed from both MiG-21 aircraft; the Panel observed signs of overspray and scratch marks in places dedicated to original insignia.
- While the age of the items found in the shipment varied greatly, most appeared to have been well maintained. Records accompanying a great deal of the equipment indicated or certified the equipment functioned in accordance with specification or had been calibrated just prior to packing.
- It is the Panel’s view that examining individually the items and their handling suggest that some, if not all, of the consignment was not expected to be returned to Cuba.
- [The Panel] notes that the voyage of another Democratic People’s Republic of Korea-flagged and -owned vessel to Cuba presents a very similar pattern to the recent voyage of the Chong Chon Gang.

- On April 2012, the general cargo vessel O Un Chong Nyon Ho (IMO 8330815) operated by OMM,11 sailed directly from Nampo to Cuba and back without any further calls in the region. After having stopped in Havana and Puerto Padre, the O Un Chong Nyon Ho drifted for several weeks off northern Cuba before returning for three weeks to Havana. Its Automatic Identification System was switched off (in violation of IMO requirements) during these three weeks, however, effectively preventing determination of further ports’ calls,as in the case of the Chong Chon Gang.