U.S. is “Incapable of Keeping a Secret,” Rumsfeld Concluded in 2005 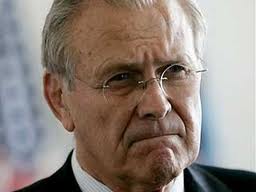 In one of his trademark “snowflake” memoranda from 2005 that was made public this week, then-Secretary of Defense Donald Rumsfeld stated flatly that the government secrecy system was a failure.
“The United States Government is incapable of keeping a secret,” he wrote (pdf) on November 2, 2005.  “If one accepts that, and I do, that means that the U.S. Government will have to craft policies that reflect that reality.”
Unfortunately, he did not elaborate on this terse statement.  The memorandum was not addressed to anyone in particular, and the profound questions it raises were left hanging.  There was no known written response to the memo and, needless to say, there is no evidence of any subsequent shift to a post-secrecy orientation in government policy.
“Not to sound too cynical,” said a former official who served in the Bush Administration, “but I would add to Rumsfeld’s observation that not only is the U.S. incapable of keeping a secret but it is also incapable of fundamentally reforming the way it keeps secrets.  I know from a practical point of view, even after that snowflake, I found DoD to be one of the most recalcitrant organizations with which to deal,” he added (on a not-for-attribution basis).
But a current official disputed the premise of the Rumsfeld memo.  “We are capable of keeping secrets– the issue is how many and how long,” he said.  “The more we seek to protect and the longer we seek to protect it the less likely we will meet with success.  The classification system can’t be effective if we over-burden the system.”
This official said that the new Secretary of Defense, Leon Panetta, could still transform the military secrecy system in a meaningful way if he were to treat it as a “mission critical” instrument to be used sparingly and with precision rather than as an inherited bureaucracy that does not have to meet any performance standards at all.
Another current official pondered “What would change if one presumed that the U.S. government cannot keep a secret?  I doubt that many USG officials would say that we should therefore stop trying.  The most likely and positive conclusion might be that we should severely limit the number and kinds of secrets we seek to protect.”
In fact, that seems to be the conclusion that was reached by Secretary Rumsfeld himself in another startling snowflake (pdf) dated August 9, 2005 and addressed to Under Secretary of Defense for Intelligence (USD(I)), Stephen Cambone: