China's Moves on Cuba Need to Be Stopped 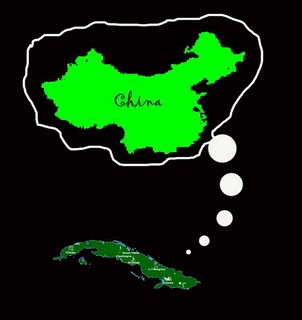 That's right, China should be stopped but Mr. Luko solution to LUKO doctrine is a win-win situation for Cuba and China not US. -Lg.
by James Luko - Nolan Chart

The Red Dragon takes another wide step of not only flexing its muscles in Asia, but now wishes to supplant Russias and (former USSRs) forward base presence 90 miles from the United States- CUBA.
Cuba is China's biggest trade partner in the Caribbean region, while China is Cuba's second-largest trade partner after Venezuela. Over the past decade, bilateral trade increased from $440 million in 2001 to $1.83 billion in 2010. [1]
In 2006 China and Cuba discussed offshore oil deals and now China's National Petroleum Corporation is a major player in Cuban infrastructure improvements. [ibid]
In 2008, none other than China's President himself, Hu JinTao visited Cuba with a sweet package of loans, grants and trade deals.
If Cuba becomes a 'client' state of China, it will be a source of leverage against America whenever the U.S. Pressures China on Tibet and Taiwan. Soon we will witness the newly constructed blue-water navy of China cruising Cuba's coast in protection of their trade routes and supply of natural resources.
In 2003 it was reported that Chinese personnel were operating at least TWO (2) intelligence signal sations in Cuba since at least 1999 ! [2]
This month, June 2011, the Vice President of China made an important visit, extending more financial aid, interest-free, as well as related health projects to be paid for by China. A client state in the making ! [3]
The best way to counter the Chinese in Cuba is to reverse Americas 50 year old, ineffective and obsolete policy of isolationism and boycott of Cuba.
The Chinese threat in Cuba should be the catalyst for the US to establish open and normalized relations, with economic incentives to re-Americanize Cuba, return of American investments and security agreements. Checking the Chinese move in Cuba early on is vital to preventing a strategic Chinese foothold 90 miles from Florida.
Allowing China to replace Russia in Cuba would be a strategic disaster. China is dangling financial assistance and investments in order to establish a beachhead close to the shores of America. This is a counter-response to Americas continued military presence in Asia, continued support of Taiwan and recent increased American aid to the Philippines in its spat with China over sovereignty of the Spratly Islands.
The Cuban people wish to return to the American fold and re-establish the traditional relationship with the Cuban anchor in Florida- namely the almost 900,000 Cubans living in Florida alone! [4]
Re-establishing normal relations with Cuba is a win-win situation and we should not allow inflexibility in our foreign policy to stand in the way. The road is clear, Soviet and then Russian domination in Cuba was a massive violation of the Monroe Doctrine and a geostrategic mistake of Kennedy not to forcibly remove Castro at the time. It is then no question that allowing the Chinese to supplant the Russians, (who now have a weak presence in Cuba in any case) needs to be stopped. In conjunction with the LUKO DOCTRINE (containing global Chinese expansion) [5] America needs to take the OFFENSIVE for a good DEFENSE of our close perimeter security- CUBA.
Publicado por Unknown en 6/29/2011 09:29:00 a. m.